Meet Kevin Michael Dolan aka @ExtraDeadJCB; a vile racist, antisemite, misogynist, and hateful bigot. Kevin is a returned Mormon missionary, and one of the original members of the Discord server where Deznat came to life. He enjoys solid family connections, has a Masters degree, a great salary, as well as active U.S. Security Clearance through his role as a Senior Data Scientist at Booz Allen Hamilton where he just received a “big promotion“. Kevin has been living dual lives. One in the light, and one in the shadows. Today, we are revealing this 35-year-old Economics graduate of Brigham Young University and MBA recipient from the University of Texas at Austin’s alter-ego. The one he uses on the internet to spew hate, conspiracy theories, and pervert religion to suit his white supremacist agenda.

“You’re going to be doxxed. Probably should have nuked your account…” – Kevin Michael Dolan

Content Warning: This article contains racist, queerphobic and misogynistic statements, antisemitism, references to sexual assault and other acts of violence, and other objectionable language. We feel it is important to show examples of this person’s hateful ideology in his own words, rather than merely describing or characterizing it. In all cases where slurs or other offensive words have letters replaced by asterisks, or have been redacted or obscured in images, those redactions have been added by the authors of this article, not by the person who is being quoted/screencapped.

A major influence in Kevin Michael Dolan’s ideology is white nationalist Charles Murray. Murray, a social scientist, is the author of several books promoting racist pseudoscience and using deceptive statistics to argue that social inequality is caused by the genetic inferiority of the black and Latino communities, women, and the poor (see SPLC). Dolan repeats these long-discredited theories and presents them as fact or as information worth further exploration. Dolan also recommends literature authored by Murray to his followers and believes Murray’s theories in Human Diversity are an attempt to save America (if not the entire Western liberal order).

Kevin Dolan is a vile racist and it is clear he flirted with racist beliefs long before he ever created the John Cook Bennett personality. From his now-deleted blog, Old Lamps for New, we learn that Dolan views the lack of success on his Mormon mission directly the fault of the challenges minorities face, although he does concede that he was nineteen-years-old at the time and didn’t have the proper tools or experience to deal with failure. In fact, the title of one of his blogs is simply I’d Like Another Mission Please. In the blog post Dolan states “I loved those people–at least, as much as I knew how,” but goes on to mention demographic percentages (60% black, 30% white) as well as problems he saw associated with the majority black population he proselyted. Dolan makes it clear he chose to handle failure on his mission where he spent much of his time in Memphis, Tennessee by dehumanizing people:

“For me, I think the solution was detachment, and a pretty dark sense of humor. I hear EMTs talk that way–when it’s your job to help, and you spend so much time around people you can’t help, it’s tempting to dehumanize them a little (or a lot) just to make your world make sense. We weren’t dealing with corpses, but sometimes it felt that way.” -Kevin Michael Dolan

One can make the argument that Dolan’s Mormon mission experience served as a springboard for his harmful views on race later in life.

Under the perceived safety of anonymity is when Kevin Dolan’s racist views really come to light. Dolan views certain races as scourges or forces of evil, views refugees as a drain on the welfare system, and holds negative views on immigration. Dolan responds to the question, “are Italians even white?” with “Black on black crime tbh.” He has also tweeted his approval when others make racist comments towards Asians and towards Indians.

Dolan also uses his religious beliefs to justify racism. He sees the amount of melanin in one’s skin as a “curse” or “mark” from God and uses the Book of Mormon (what he refers to as “the most correct book”) to prove that belief. Dolan also posits that the so-called curse or mark can be erased through genetic mixing with the white race. Dolan has also referenced the sexual assault of Native Americans when arguing for the superiority of the white race. This is particularly concerning considering he says his wife is a minority.

In addition to believing that white men are superior to everyone else, Kevin Dolan flirts with antisemitic conspiracy theories. He also has stereotyped views about Jews. Dolan’s hostile beliefs towards Jews has led him to state that Jews are driving evil in so-called power centers across the United States and goes as far as to call them “creatures” that are a “beacon of demonic influence.”

Dolan also uses his Mormon religious beliefs to support his antisemitism. Mormons believe American Indigenous peoples are decedents of ancient Jews who traveled to the American continents and split into two groups: the righteous group having light skin who were called Nephites, while the wicked group was cursed with dark skin and were called Lamanites. According to the Book of Mormon, all of the Nephites were eventually killed in a series of wars by the Lamanites. In a tweet, Dolan poses the question: “Pre-Columbian human sacrifices? Late-Nephite race massacres? What is driving this?” DezNat user @SamParkerSenate replies, “Total mystery, but I’ll bet our illustrious jewish friends would be willing to give you an opinion.” Dolan signals his agreement that Jews are behind perceived evil by “liking” the reply.

Dolan uses a mixture of antisemitic conspiracy theories (e.g. “Elite Satanic Conspiracy”), frequently used by those who believe in QAnon (see QAnon, Blood Libel, and the Satanic Panic) combined with his religious beliefs when proclaiming the inferiority of Jews and racial groups or to support his political beliefs. The theory about a satanic cabal is based on one of the world’s oldest, most lethal antisemitic libels. Dolan combines this antisemitic lie about Jews with his religious beliefs about Native Americans when he says, “The defining conflict of the BOM [Book of Mormon] is elite satanic conspiracy.” He also holds the idea that Jews secretly control the government of the United States which he signifies by using the white supremacist acronym ZOG which is short for Zionist Occupation Government.

Considering his track record, it should come as no surprise that Kevin Dolan is also a sexist, antifeminist, and misogynist. Kevin Dolan believes that the woman’s place is at home taking care of children and is opposed to women, especially mothers, in the workforce. Dolan feels strongly about a mother’s only place being at home taking care of children, and that there is no viable political solution to make this happen so he’s willing to “sink the whole boat.” He is so adamantly opposed to women working that it has led him to make absurd claims such as divorce is the same as child molestation in terms of harm it causes and that adultery should be a hanging offense (presumably because it can lead to divorce).

Dolan views women like livestock, as if a woman being feminist is the equivalent of losing a good dairy cow or show pig. He views women as property. Essentially, he wants to keep women uneducated, sheltered, and visually pleasing for the male gaze. Dolan believes:

He believes feminism is evil–a direct conduit to Satan. Dolan is opposed to all forms of feminism and believes the psychological root of feminism is “sexual frustration” and women getting “sexually abused one too many times.” He later states, “feminism, like lesbianism, is entirely curable & in precisely the same way.” The authors of this article are too horrified to assume what he meant by that.

About His Namesake – John C. Bennett

Latter-day Saints might find it disturbing that Kevin Michael Dolan chose the so-called “Lucifer” of early Mormonism as his namesake–even more so specifically the “unnaturally preserved head” of Doctor John Cook Bennett to hide behind online. Bennett, who served as the assistant to Mormon founder and prophet, Joseph Smith, Jr. during the Nauvoo, Illinois period, is one of the most notorious apostates of the Mormon faith. Bennett used his trusted position to seduce women, both married and single and it became widely known he was offering to perform abortions on the women he impregnated in order to conceal their pregnancies. He was eventually excommunicated for adultery. Bennett’s accomplishments and successes in life are overshadowed by his scams and deceit. 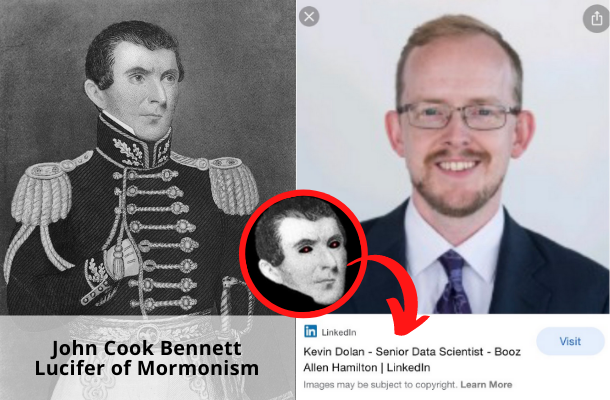 One of the original Deseret Nationalists, Kevin Michael Dolan has used several different handles to publish racist, misogynistic, and white supremacist talking points anonymously. Currently, Kevin tweets “anonymously” under the handle @extradeadjcb after his original account @JCBontheDL was suspended for violating the Twitter rules. After further research we were able to determine JCBontheDL (John C Bennett on the Down Low) was previously the handle KMDontheUH (Kevin Michael Dolan on the Up High) before he changed it. An archive of his Twitter account shows that he used the display name “Kevin Dolan” before he changed his handle.

We were able to connect Dolan to his real life identity after discovering a screen grab taken from the original Discord server that gave rise to Deseret Nationalism. In the screen grab a user going by “elf” posted a screencap of a tweet from @JCBontheDL in which Dolan promoted his old blog, Old Lamps for New, tweeting, “I wrote this afterward.” Using information found on the since deleted blog (which apparently before 2014 was known as “No Marketable Skills”) we were then able to gather handy details about his life such as where he served an LDS mission, the name of his wife and grandfather, as well as his Facebook account which confirmed the ID and led us to his home address in Culpeper, Virginia. Kevin’s twitter accounts also connected him to other social platforms which allowed us to confirm multiple details about his personal life.

Booz Allen Hamilton says they are “committed to advancing Diversity, Equity, and Inclusion” and were recognized as a 2021 World’s Most Ethical Company.

“As a values-driven company, we have a responsibility to help create a more equitable world. Though we’ve long been committed to advancing diversity, equity, and inclusion, recent events compelled us to deepen our commitment to racial and social equity both inside Booz Allen and beyond.” Booze Allen Hamilton website​

You can call their Ethics Helpline at 800-501-8755 or email: ethics@bah.com or submit a report online and let them know their employee Kevin Michael Dolan has been harassing minorities, women and journalists, as well as posting violent racist, antisemitic, homophobic, misogynistic, and otherwise hateful speech online for years.

“…hypothetically if a body got run out of their industry for saying unpopular truths online, a year would be enough to learn a trade or start a business” Kevin Michael Dolan aka @extradeadjcb