In September of 2019, the Twitter account @ContextDeznat tweeted a link to a Google drive containing 41 screenshots from a Discord server called “A Bunch of Latter Day Saints.” (Additional screenshots were later posted by Twitter user Evan Worthen.) The images showed conversations involving several users of the #DezNat Twitter hashtag, among others. Even though some of the Discord users were self-described Twitter trolls intent on resisting “political correctness,” the difference between the language and ideas in their public tweets and the discussion in the Discord server was shocking. Racism and other hateful ideologies were promoted and casually discussed, with no apparent dissent from the server’s owners or moderators. Some of the most consistently disturbing content in the screenshots was posted by a user calling himself “Brother Jerman.”

Content Warning: This article contains racist and misogynistic statements, antisemitism, numerous racial and other slurs, and references to violence such as school shootings and sexual assault. As disturbing and repulsive as this content is, we feel it is important to show examples of this person’s hateful ideology in his own words, rather than simply describing it. In all cases where slurs or other offensive words have letters replaced by asterisks, or have been redacted or obscured in images, those redactions have been added by the authors of this article, not by the person who is being quoted/screencapped.

CALL TO ACTION AT END OF ARTICLE

This user was easy to identify, because he didn’t bother to use a pseudonym – his last name is Jerman. He also posted a clear picture of his face in the Discord, which allowed us to confirm his identity as John “Jack” Jerman, of Salt Lake City, Utah. We were able to find other social media profiles he created on Quora, Medium, Twitter, Facebook and Instagram under his own name, as well as fragmentary archives of multiple suspended Twitter accounts. 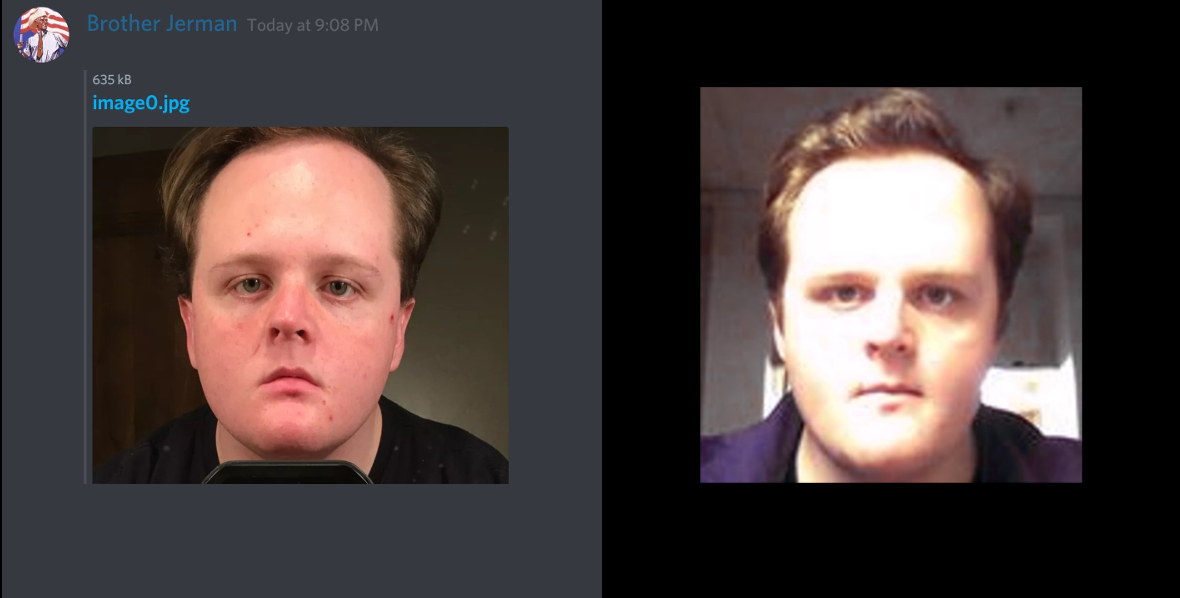 By the time he found his way to the “Bunch of Latter Day Saints” Discord server, Jack Jerman was already well on his way to being a racist and an antisemite. In April of 2018 he claimed in a Quora post that he wasn’t a racist, but said he wouldn’t really care if someone called him one; Twitter archives from 2018 show him re-tweeting neo-Nazi podcaster Alex McNabb (see SPLC post on Alex McNabb) and white supremacist Stefan Molyneux (more info about Stefan Molyneux here).

In the DezNat Discord chat, Jerman posted a parody of Gary Jules’s “Mad World” lyrics, dedicated to his old high school, describing his anger and sorrow at seeing “mestizo” faces all around him at school every day. “The dreams of mass school shootings are the best I’ve ever had,” he wrote, adding, “I can’t help but to blame jews” for the “Brown world” around him. He even fantasized about carrying out a racially-motivated attack himself: “I dream of a terror attack occurring in the cafeteria of my old highschool […] I could almost guarantee no white kids would be harmed.”

In March of 2019, he openly declared in the DezNat chat that he was “a yuge racist.” 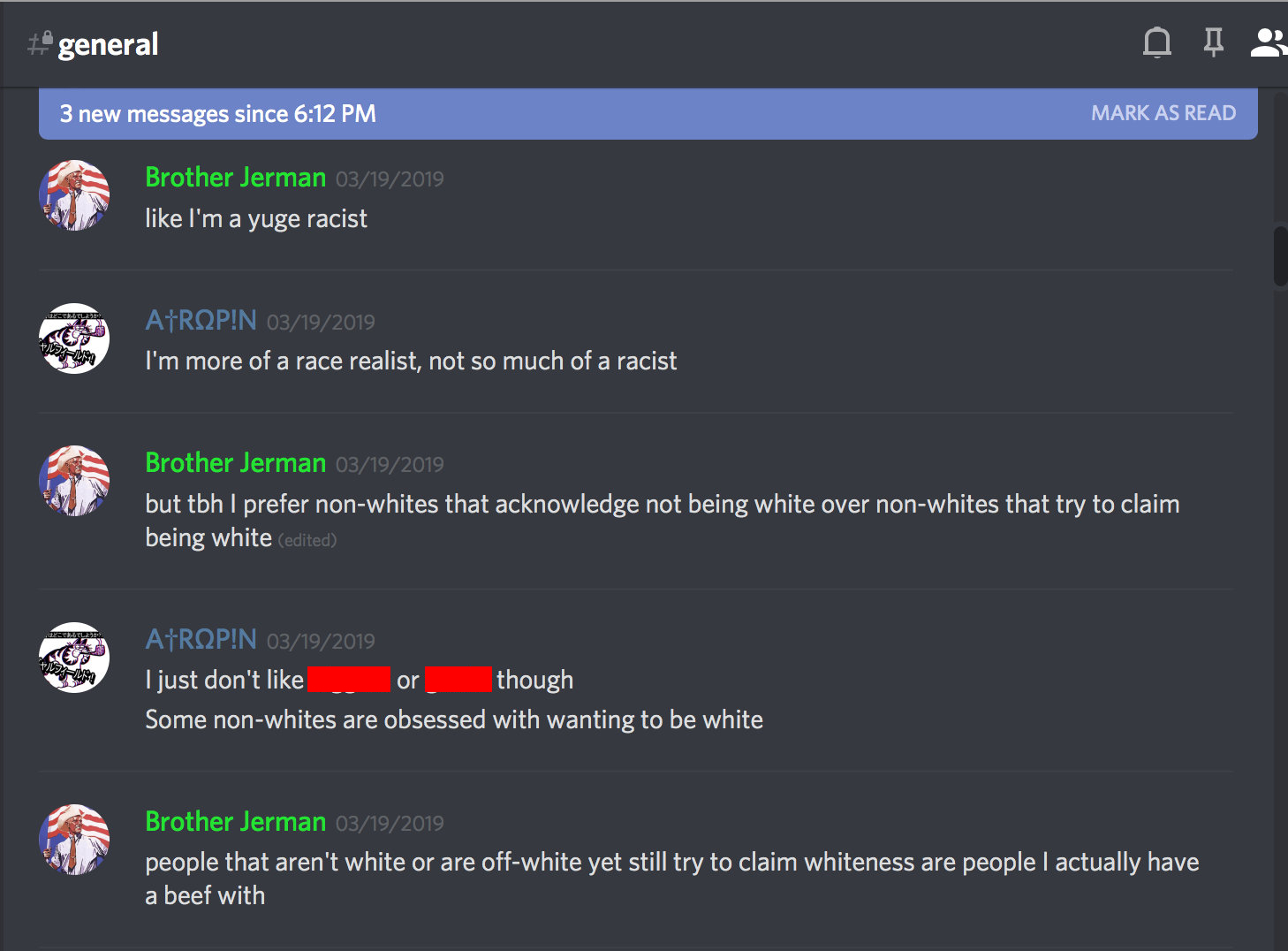 Jerman’s claim that Jews are responsible for the presence of non-white students at his high school is part of an antisemitic conspiracy theory promoted by neo-Nazi Kevin MacDonald. The theory posits that Jewish people are “genetically driven to destroy Western societies,” and have made strategic alliances with black, Hispanic, and Asian people in order to do so. In the Discord, Jerman further explains the Jewish “plot”:

“I think a majority of leftist Jews […] actually do sincerely believe in multicultural leftism not even as a plot but because they’ve been indoctrinated into their own propaganda. Though of course the Jews that actually are in on the rouse[sic] will influence them enough to still care enough about ‘Jewish identity’ but at the end of the day they aren’t actually in on the plan.”

He also offers that “someone” should call their state legislator and ask them “Have you gassed the k*kes yet?” 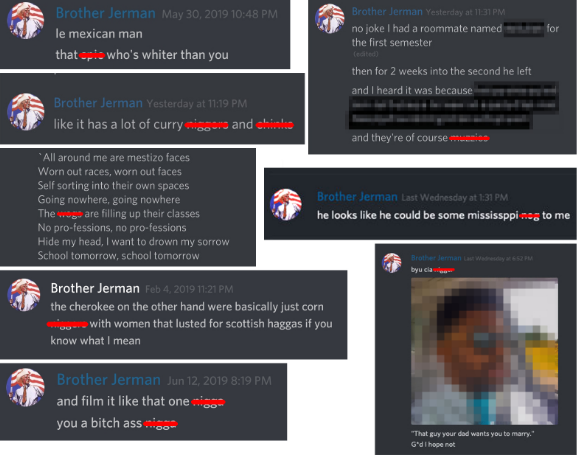 sources: screenshots from Google drive and from Evan Worthen, @harambevan on Twitter. CLICK HERE to see the unredacted version of this image, showing the slurs Jack Jerman used on Discord.

Although he claims pioneer heritage, Jack Jerman grew up in what he describes as an “ex-Mormon” family, and joined the LDS church as a convert in his late teens. During the time that he was posting messages in the DezNat Discord server, he would likely have attended weekly worship services primarily at a college ward. When attending his “home ward” in Salt Lake City, however, he was offended at the number of bi-racial couples and families in the congregation. Describing a “white female [and] polynesian male” couple and their children as an example of the “racial stings” he feels at church, he laments that the family’s “kids act like n*ggers. […] the boys just crawl underneath the pews and pop out, but the ward just carries on like nothing is happening.” After Jerman describes several other bi-racial couples and families in the ward, Discord user “Ghawk” remarks, “Your ward sounds horrible.” Jerman replies, “it’s kind of depressing in that respect, like I’m just sitting in one giant infected wound.”

Jerman’s social media posts about women, and particularly his rape-apology messages, are equally disturbing. He speculates on Discord that “most women who claim to be lesbians aren’t really”; rather, they are “just women that need the D[ick].” In other words, according to Jack Jerman, most lesbians are straight women who are saying they don’t want to have sex with men, but would change their minds if a man had sex with them anyway – a concept described by Discord user “Atropin” as “corrective rape.” Discussing a femme Twitter user who had been harassed by DezNat trolls, Jerman says, “She knows deep down we’re right and is probably attracted to us for going against her feminine mindset.” He appears to think that the twitter user secretly welcomes their harassment, and is “probably” attracted to men who verbally abuse her online. When Atropin claims the twitter user is obsessed with them, Jerman ups the ante, saying the woman not only “needs” but actually wants “the d.”

At other times he casually declares that women are “pretty stupid and utterly irrational,” “women are property,” and “women are evil.”

And in May of 2019, while Jack Jerman was preparing to serve as an ordained representative of the LDS church, Twitter user @DeseretDagger tweeted “I disavow any DezNat who support rape.” Although it does not appear that Jerman responded on Twitter, he did post a screenshot of the @DeseretDagger disavowal tweet on Discord. The screenshot shows that Jerman’s account follows @DeseretDagger on Twitter, but is about to block the account, presumably because of the disavowal. A few months later, Jerman would travel to California to tell people how much Jesus loves them.

Surprisingly, Jerman declares himself open to the idea of being “considerate” to gay people, because “many of them are born in the [LDS] church” – but only as long as they act like they’re straight or asexual. “I am totally opposed to conceding any ground to tolerating people that are sexually active gays.” 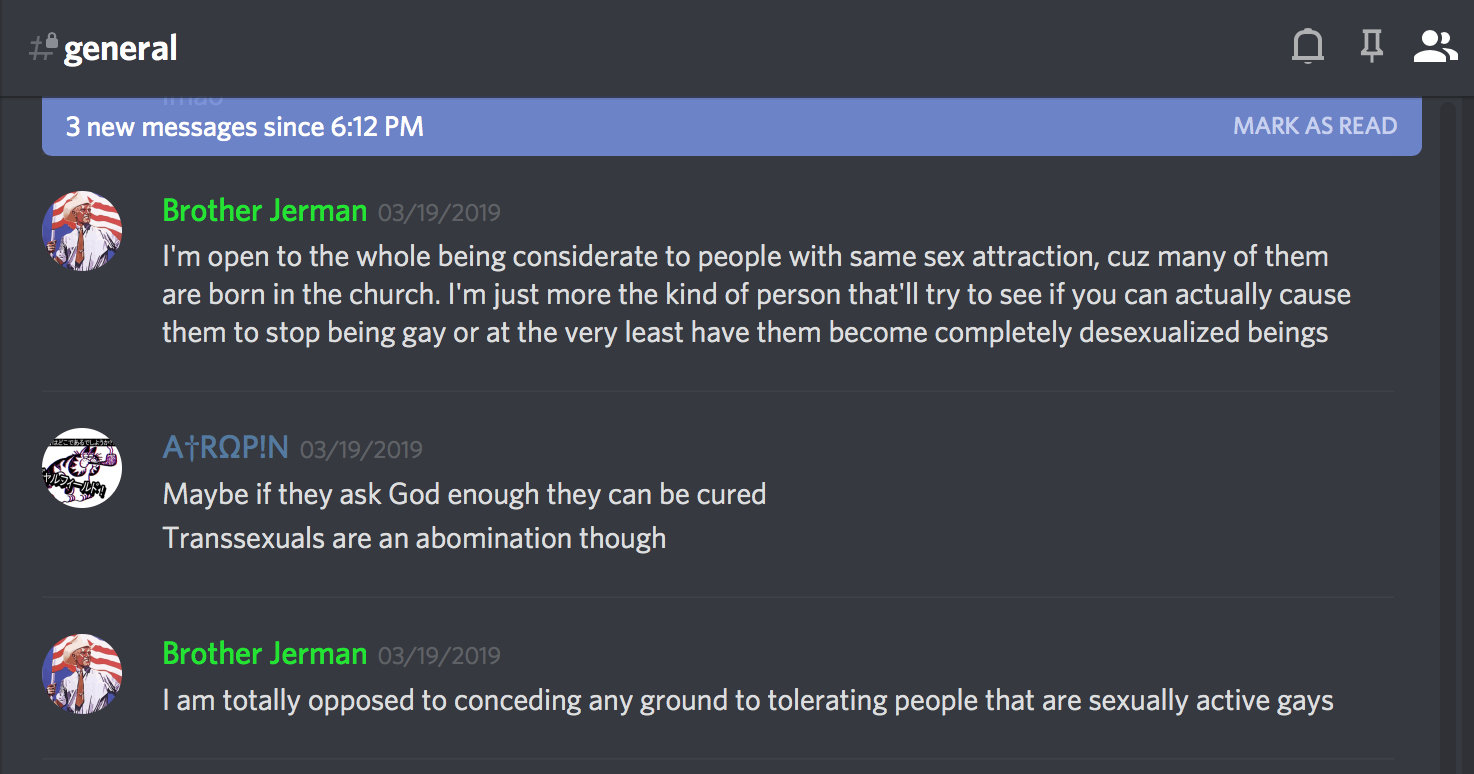 He appears to think this attitude constitutes “tolerance,” explaining that he was “conditioned to tolerate f*gs from birth.” He is not willing to extend the same “consideration” to trans people, however, since he considers them to be sub-human. He refers to them with scare quotes, saying “trans ‘people’ are just too much,” and at one point declares, “they’re not people.”

In November 2019, Elder Jack Jerman entered the Missionary Training Center (MTC) prior to beginning his LDS mission in San Bernardino, CA. Although the “Bunch of Latter Day Saints” Discord server has reportedly been deleted, Elder Jerman has continued his social media activity while in the mission field. His Facebook page features a picture of him wearing his missionary nametag, and the caption proudly declares that he is a “Convert and volunteer of the Church of Jesus Christ of Latter-day Saints.”

Jerman occasionally posts pictures from California; a recent post, from April of 2021, says he’s in Hesperia. And in January of this year, when the DezNat Facebook page posted a screenshot of someone tweeting that DezNat users had bullied and threatened him online, Jack Jerman left a “laughing” react on the post.

The local LDS official who supervises the missionaries in San Bernardino is Mission President Marshall McKinnon. We believe that President McKinnon is unaware of Jack Jerman’s social media activity. If you’d like to let him know that one of his missionaries is racist, antisemitic, queer/transphobic, a misogynist, and takes time out of his busy schedule to laugh at people who say they’re receiving death threats, leaving a comment at the San Bernardino Mission’s Facebook page would be a convenient way to do that.